We are glad to share with you the results of survey “Cross-border hiring intentions” in the year ahead.

We are glad to share with you the results of survey “Effects from the economy” about company bonuses and holiday parties. 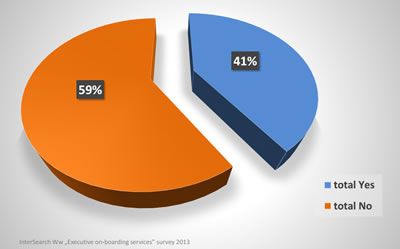 Among companies responding to a recent InterSearch Worldwide survey, just 41 percent offer some form of executive on-boarding to their new executives, with organizational culture alignment and executive development planning topping the list. InterSearch is a leading global executive search organization operating in more than 45 countries.

“Given the importance of executive assimilation and retention – as well as building relationships and of expediting opportunities for meaningful contributions – we were surprised to find that six out of 10 companies responding to our survey do not provide any sort of executive on-boarding services at all to their new executives,” said InterSearch Chairman Frank Schelstraete.

Among the companies that do offer executive on-boarding to their new executives, the most common service was organizational culture alignment (24%), followed by executive development planning (21%). Mentoring and diversity/inclusion training each occur at 17% of respondents’ companies, while 16% offer some kind of professional development. Life coaching occurs at 3% of respondents’ companies, while media training occurs at just 2%.

InterSearch conducted the online survey of companies around the world from June through September 2013.

Additional survey results can be found in the following PDF document:

Fewer than half – just 45 percent – of executives from 34 countries around the world say their companies have a process for conducting CEO succession planning, according to a recent survey by InterSearch Worldwide, a leading global executive search organization operating in more than 45 countries.

“Forward-thinking, responsible companies have robust processes for CEO succession planning, so it may astonish some readers that fewer than half of the companies represented in our survey actually do,” said InterSearch Chairman Frank Schelstraete. “Our advice to the 55 percent that do not: never let an emergency situation catch your company by surprise. Executives can resign or even pass away unexpectedly. Establishing a CEO succession plan should be a fundamental obligation of public and private companies – of any size, in any region – and their boards.”

The data were more evenly split among medium-sized companies (those with annual revenue between US$50-500 million or approximately 40-400 million Euro) with 49 percent having such a plan.

And among small companies (those with annual revenue under US$50 million or approximately 40 million Euro) only 17 percent had a CEO succession plan.

By geographic region, 38 percent of companies had a CEO succession plan in place in EMEA, which includes a wide range of countries from this diverse region.

In the Americas, where respondents came primarily from the United States, Canada, and a few South American companies, 74 percent of companies had such a plan.

And in Asia, 53 percent indicated their companies had a CEO succession plan. This region’s respondents came primarily from Australia, Japan and South Korea.

Nearly three-quarters (73 percent) of all respondents say their companies review and/or update their CEO succession plan at least every three years, with a majority (56 percent) doing so once every year. Twenty-seven percent do so only as needed.

“My estimation is that we have a good process in place. Internal candidates are monitored and assessed regularly [and] we have a programme to attract external talents.”
~Large private firm, Switzerland

“Both the succession plan as well as standardized nomination and handover processes are established. As always, there are situations where the defined process is violated.”
~Large private firm, Austria

“The process [has been] clear and consistent over the years. The succession plan usually considers internal candidates who have been growing in the organization [in] high responsibility roles.”
~Large private firm, Italy

InterSearch conducted the online survey of executives around the world during the two months from 1 December 2012 through 31 January 2013.

InterSearch Worldwide is a global organization of executive search firms consistently ranked amongst the largest retained executive search practices in the world. InterSearch is currently operating in more than 45 countries, staffed by local professionals selected for their experience and reputation in their own markets and their ability to operate internationally. For additional information, please visit www.intersearch.org