Womenomics – Diversity on Boards of Directors

Womenomics is a very thought-provoking book that explores the facts & dynamics surrounding the importance of Gender Diversity in the Boardroom & the rise of female-driven growth potential in Fortunate 100 companies.

This article by Jakob Stengel Head of the Board Practice Group of InterSearch Worldwide answers the question:

“Is diversity purely driven by political correctness or are investors now convinced that appropriate diversity on boards will substantially improve performance?”

In the past couple of years, institutional investors have been pushing public-listed boards harder and harder on diversity. Why? It is certainly not about political correctness. It is business. Both investors and CEOs alike are now convinced that appropriate diversity on boards will substantially improve group decision-making and improve performance. Furthermore, many fund companies believe that improving diversity will resonate with young people, who are a significant target group for increased deposits for the fund industry.

A Little Background Information on Diversity

When talking about diversity in a board or executive leadership context, we usually mean “the accessibility to and application of several different knowledge domains – simultaneously”, and hereby we mean the unique combination of experience, knowledge, and perspective that together form the diversity and the difference from all other unique combinations of the same factors. Every unique combination adds up to a specific identity.

Neuroscience has long known that already as infants, humans are programmed to favor the sounds, objects, smells, toys, faces etc. that we are most exposed to. It is the recognizability that attracts us. And at the same time – still, at the infant stage – we are genetically pre-programmed to fear separation (from the known and safe) and to perceive meetings with strangers as the worst thing imaginable.

Yet, despite this apparent biological imperative, when it comes to “real life” and specifically business, homogeneity in a team generally means that we do less and poorer research, that alternatives are considered and discussed less frequently, that our decisions are made on a relatively less informed basis and (with a self-perpetuating effect) that the sense of group affiliation becomes more important than the result itself. While our basic instinct will normally drive us towards the recognizable (homogeneity), we can be our most productive and efficient when we are dealing with the unknown and the unexpected (heterogeneity).

While homogeneity is thus a strong foundation for resoluteness, security and the ability to execute (strong qualities in crisis situations), heterogeneity, on the other hand, provides the most solid basis for innovation and risk management.

Diversity as a Driver of Performance

Productivity is normally influenced by two factors: specialization (i.e., the concentration of domain- knowledge) and a focus on the predominant domains. It is the complementarity that is critical and as such provides the best starting point for a high coefficient of utilization and thus a high level of productivity.

Innovation depends on the “invention” of new knowledge domains as well as on a continuous development of the existing domains – and not least on a variation of the applied domains. This forms the foundation for both exploration and utilization – and hence also for innovation.

Why is all of this particularly relevant and important when talking about boards? Because boards are like the national football team; they do not train together on a daily basis but only meet to play the important matches – in other words, when they convene for the board meetings. Hence, you cannot improve board effectiveness in the same way that you would normally try to improve employees and management teams.

Recent Studies on the Impact of Diversity

In academic research, the interest in diversity on boards has typically concentrated on two elements:

However, researchers have often, despite very clear findings of a correlation between greater diversity and better return on equity (RoE), been unable to find proof of causality. It has often been mentioned that numerous factors could all have impacted the research results (including differences in the state of the market between compared years of financial results, differences in size of company research objects or in differences in industry dynamics when comparing results from companies in different industries).

However, a number of companies and organizations have, over the past 10 years, managed to establish and document in a number of international studies that RoE is, in fact, higher for companies with heterogeneous boards and executive management teams. These studies all come out of hard- facts-focused organizations and companies such as McKinsey & Co, IMF, BlackRock, State Street, Boston Consulting Group, Credit Suisse, Catalyst, Nordea, Copenhagen Business School and MSCI.

To highlight the results of just one of them – with a very high number of data entries – MSCI ESG Research in November 2015 found that companies with a large share of gender diversity (i.e., more women) in their executive teams and/or their boards would generate a yearly RoE of 10.1% compared to 7.4% for the companies without such a level of diversity. The study had numbers from 4,218 companies worldwide in total.

The Latest Data on Diversity Development

The very latest MSCI report, from December 2017, finds that:

Boards’ Hesitancy on Pushing for Diversity

So why is it that while some of the most trustworthy and respected companies (e.g., McKinsey & Co, BlackRock, State Street, Boston Consulting Group, Credit Suisse, Nordea and MSCI) find a clear correlation between the financial and operational performance of companies on the one hand and a high level of gender diversity on executive teams and boards of directors on the other that the board directors themselves hesitate to acknowledge this?

It would seem that the push for diversity has created discomfort for some (male) board directors. Through many conversations with board members over the past 20 years, I have learned that the vast majority of directors are not opposed to increasing diversity on corporate boards. However, many directors simply believe that business and professional skills have a greater influence on positive board performance and outcomes. Yet the push for board diversity is now part of the permanent landscape facing directors that may result in disruptive disputes. Under these circumstances, the best course of action may be to accept reality, be practical, and fully embrace board diversity. At a minimum, directors should be ready to have a conversation with investors who want to engage in board diversity. Investors will point out that there are many qualified women and minorities for particular industries. And let me add if you do not have such individuals on your list of potential candidates, you are simply not looking in the right places or using the right recruiting channels.

The OECD has found that the growing awareness of the under-representation of women in leadership and their key contributions to business has led to increased efforts to improve gender balance at the top of companies.

Further, the OECD Guidelines on Corporate Governance of State-Owned Enterprises 3 encourages the ownership entity to consider the OECD recommendation on gender equality.4 It recommends that jurisdictions encourage measures such as voluntary targets, disclosure requirements and private initiatives that enhance gender balance on boards and in the senior management of listed companies and consider the costs and benefits of other approaches such as boardroom quotas.

Countries in favour of quotas support the idea that what gets measured gets done. A higher percentage of women on boards can be seen in countries where legal requirements have been passed or are being considered. In 2003, Norway adopted quota legislation for corporate boards and, following the introduction of sanctions, has 39% women on boards in 2017. Since then, some countries have followed suit. For example, the share of women on boards in France grew from approximately 10.7% in 2009 to 33% in 2015 following a quota in 2011, and in Italy, from 8% to 26% after legislation was passed in 2012. The impact of India’s legislation requiring one woman on listed company boards in its 2013 Companies Act is yet to be determined.

The UK approach is two-fold. There is a new regulatory reporting requirement, introduced in 2013 for all listed companies, to disclose in their annual report the gender breakdown of the most senior levels as well as across the workforce. In addition, the coalition government appointed Lord Davies in 2011 to conduct an independent review to assess the gender balance in the top 100 UK businesses. The recommendations that followed set a voluntary, business-led 25% target. Four years on, the Women on Boards Davies Review 5 published in October 2015, highlights the main achievements:

The new Davies’ report also sets a new voluntary, business-led target of 33% for the top 350 companies for women’s representation to be achieved in the next 5 years.

Sweden’s OMX, the Australian Securities Exchange, Canada’s Ontario Securities Commission, New Zealand Exchange and Hong Kong Stock Exchange Limited now require companies to disclose gender balance policies and data on women on boards under a “comply or explain” regulation. Japan is set to fill 30% of all leadership positions with women by 2020 and requires listed companies to disclose information on the number of women board members. Furthermore, some countries have established specific awards aimed at women and companies. For example, Australia set up annual company achievement awards in six categories directly measuring gender balance and advancement initiatives.

What Should Boards Be Doing Now?

Well, increase diversity seems self-evident. However, acknowledging that this will be a process over at least a few years, there are well-proven measures that boards can easily adopt: establishing a diversity committee and adopting a board diversity policy

By nature, boards are cautious and have been hesitant to adopt formal policies on diversity as well as to establish formal diversity committees. Many boards try to have it both ways, publicly endorsing board diversity while declining to adopt a formal diversity policy. Clearly, this approach will no longer be sufficient to satisfy investors, considering the public announcements made by, for example, BlackRock, State Street and CalPERS.

Going forward, adopting a board diversity policy will be encouraged by investors and considered a best practice. The chair of a board’s nominations and governance committee should lead the committee, with the input of other directors, in creating the board’s diversity policy. Two elements that investors will look for in reviewing diversity policies are 1) an annual report on the effectiveness of the diversity policy and 2) detailed disclosure of the current diversity characteristics of the board.

Further, in connection with the annual board evaluation, boards should consider disclosing – through a matrix approach or a narrative – each board member’s specific skills and experience, as well as their background, including gender, race, and ethnicity. This type of disclosure offers an opportunity to demonstrate each director’s qualifications – highlighting skill sets and diverse perspectives – and thereby thoroughly satisfying the majority of investors’ expectations of disclosure and transparency on the subject.

The following countries and jurisdictions have pending suggestions on quotas: 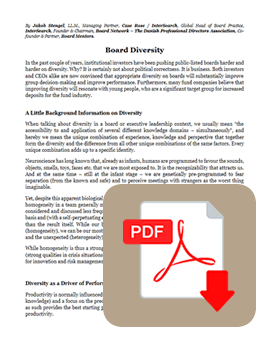 Necessary Analytics Privacy Center Privacy Policy Cookie Policy
These cookies are necessary for the website to function and cannot be switched off in our systems.
intersearch.org - Preserve user session
Preserves user session state across page requests.
These cookies allow us to count visits and traffic sources, so we can measure and improve the performance of our site.
Google Analytics
Track anonymized user information to improve our website.
youtube-nocookie.com
Used by Anonymized version of Youtube video service provider: youtube-nocookie.com
Decline all Services
Accept all Services